CORAL SPRINGS, Fla. – After signing an entry-level contract and making his NHL debut with the Florida Panthers at the tail end of last season, defenseman Brady Keeper returned home to Cross Lake, Manitoba at the start of this summer to discover a very curious change of address.

His house was where it’d always been, but the name of the street it resided on caught his attention.

He was now living on “Brady Keeper Drive.”

“They named a street after me,” Keeper said with a wholesome chuckle. “That was pretty cool.”

As the first member of the Pimicikamak Cree Nation to make it to the NHL, the street name was just one of many grand gestures that greeted Keeper upon his arrival home. The day began with a parade and gathering at the community’s arena and ended with a feast, music and dancing.

Of the reserve’s roughly 8,000 residents, it’s been said that it felt as if almost all of them were in attendance.

“It was pretty crazy,” Keeper said the hero’s welcome he received back in April. “The whole community came down to the rink and celebrated with me and my family. That was pretty nice of them. I didn’t think it was going to be that big, but it was really something special.”

Prior to joining the Panthers as a free agent on March 18, Keeper spent two seasons at the University of Maine, where he registered 13 goals and 31 assists in 77 games. In his final collegiate campaign, he led all Black Bears defensemen goals (7), assists (15) and points (22).

Making his NHL debut less than two weeks after putting pen to paper on his contract, he posted one shot, one block, and two hits during a 5-2 win against the Ottawa Senators on March 28, his closest family and friends making the long journey to watch him take the ice and make history.

“I’m just really happy to get a chance to play in the NHL,” Keeper said after the game in which he saw 12:40 of ice time while playing on the team’s third pairing. “My family and them are probably proud of me, my community back home and other aboriginal people.

“I’m just really excited to play. I have no words to explain how I feel. I’m just really happy… I just tried to keep it simple… Once the game got going, I felt comfortable. That’s what happened. I played pretty well and I’m glad we got the two points… I’ve just got to get stronger and keep it simple.” 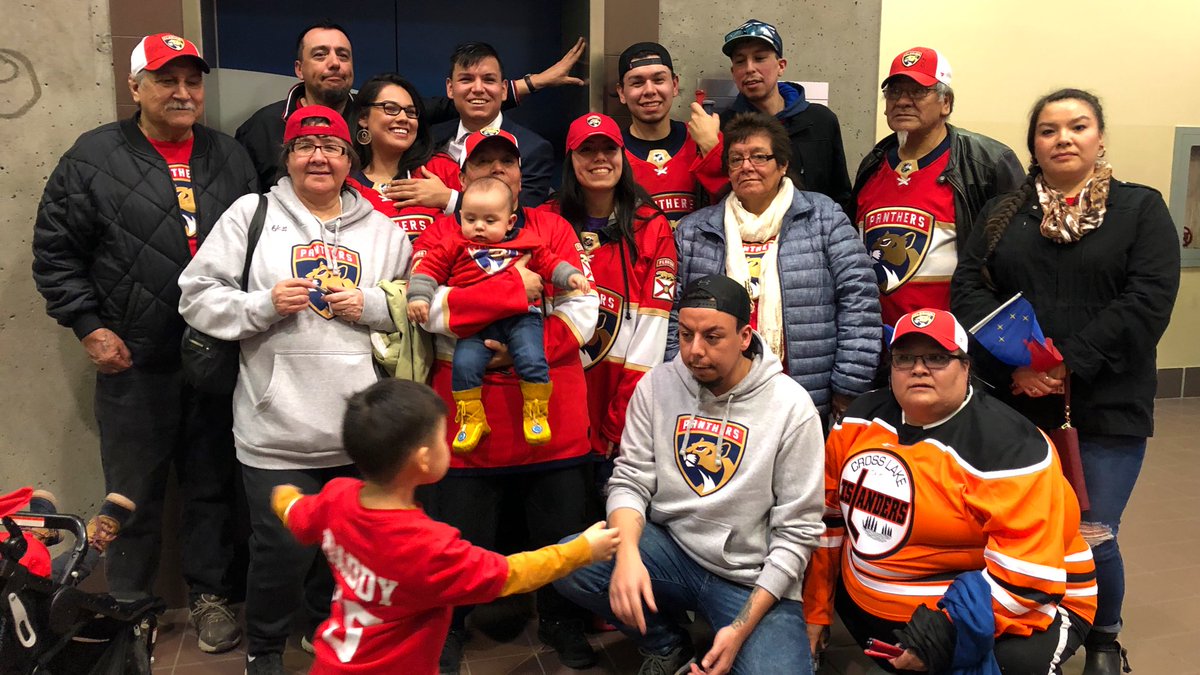 Although that was the only game he played in, Keeper said the experience was invaluable.

“I think it shows that I can play with the big boys, but obviously there’s a lot of work still to be done,” Keeper said after the second day of development camp on Friday morning at the Panthers IceDen. “Hopefully I can come into camp working hard still and make it in some games.”

In addition to his newfound fame, one of the biggest changes for Keeper this summer has been the way he approaches his training. Growing up, he had no access to a gym — Cross Lake only recently opened one a year ago — so he spent most of his time running to keep his legs active.

“I ran before school and after school once in a while just to keep in shape,” Keeper said.

Entering his first full season in the professional ranks, running is still a big part of Keeper’s day-to-day life, but he’s also invested in other new training methods. After spending about a month back home in Manitoba, he traveled to Cape Cod, Mass. to work out with Florida’s skating and skills coach Paul Vincent and the team’s new strength and conditioning coach Mike Donoghue.

When asked about the various adjustments that Keeper has made, Panthers Director of Player Personnel Bryan McCabe said he was happy to see the prospect “get out of his comfort zone this summer” and added that he’s one of the guys at camp “fighting for a job like everyone else.”

“I think it was very beneficial for him to get a taste of what it’s like to be up here and be around pros and stuff like that,” McCabe said of Keeper’s development. “He’ll definitely be ahead of the curve in that aspect. He’s a really smart player, asks good questions and listens… He thinks the game really well and has a good hockey sense. I’m really excited for his future.”

As for this week’s camp, Keeper wants to set himself apart from the other 40 prospects in attendance, hoping to leave a good impression heading into training camp in September.

“I’ve got to come in here ever day and work hard, either in the gym or on the ice,” Keeper said. “It’s what everybody else has to do. I’ve got to try and do something to play better, I guess.”

With his eyes set on playing for either the Panthers or the club’s AHL affiliate in the upcoming season, Keeper clearly isn’t intimidated by the challenge that lies ahead of him. Whether he’s playing at a small community arena in Cross Lake or in front of 18,000 fans in Sunrise, it’s all the same to him. His life may have changed a lot this past year, but the game certainly hasn’t.

“It’s just hockey,” Keeper said. “You come out here and play and have fun at the same time.”